The camshaft is an important part of the engine's valve train. In order to ensure that the engine can inhale fresh air regularly and discharge the burned exhaust gas in time, the camshaft is responsible for driving the valve to open and close on time. Some camshafts also have the function of driving the distributor to rotate. The speed of the car engine is very high. In order to ensure the efficiency of intake and exhaust, the valve adopts an overhead design. The CHERY camshaft shaft drives the valve action through hydraulic tappets and other mechanisms. 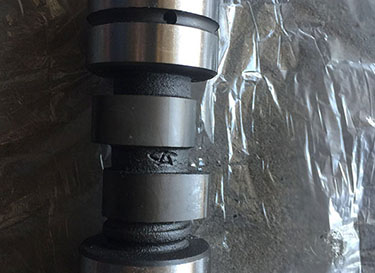 Camshafts can be divided into three types: bottom camshaft, middle camshaft, and overhead camshaft according to their placement position. The layout of these three camshafts has its own characteristics.

(1) Lower camshaft and center camshaft. The arrangement of the lower camshaft and the center camshaft is similar. The engine with these two arrangements has better performance at low speed, simple structure, and easy maintenance, so it has been widely used for a long time. At present, few car engines use lower camshafts and mid-mounted camshafts, because in these two arrangements, the distance between the camshaft and the valve is relatively long, and a longer tappet is required to cooperate with auxiliary components such as a rocker arm. To drive the valve, this results in poor smoothness of the engine when working, and noise is easily generated when the valve train is working.

When the engine is working at high speed, the performance of the longer tappet is relatively poor when the camshaft moves, and the tappet is prone to bending and deformation under the action of a large load, and in severe cases, it will cause serious failures such as the valve cannot be opened.

The camshaft overhead makes the distance between the camshaft and the valve smaller, so the rocker arm used for transmission can be made short and light, and the camshaft can even be used to drive the valve directly without the rocker arm. In addition, after the intake camshaft and exhaust camshaft are separated, the freedom of valve arrangement is increased. The spark plug can be easily arranged between the two camshafts, that is, it can be arranged at the center of the combustion chamber. These features makes the double overhead camshaft more suitable for high-speed engines.

We are the OEM NISSAN camshaft factory. If you are interested in our products, please feel free to contact us.

Next: What Is Crankshaft Machining?