What Is Crankshaft Machining?

1. How many steps are there in crankshaft processing?

The blank (small crankshaft is forged, the large crankshaft is cast with ductile iron). When forging, the bar is burnt red and then forged into a multi-turn flat surface through multiple forging dies. In the red hot state, each turn is turned in the last process To the corresponding angle.

Locate the car, find the center of the main journal on an ordinary lathe, and locate both ends of the car.

The main shaft neck of the car.

For drilling oil passage holes, there is a lubricating oil passage inside the crankshaft from the main shaft journal to the crank arm to the connecting rod journal. Special equipment is used for deep hole drilling.

Grinding the connecting rod journal is a very precise special crankshaft grinder, which will automatically grind while measuring, and the accuracy is controlled by 0.01 mm;

It is also special equipment for dynamic balance and weight removal. It can drill and remove the weight of the overweight arm blank. The above production processes are all automatically controlled by the equipment, and the operator is at best only loading and unloading assistance, and migrant workers do. The true level is reflected in the manufacturing, debugging, and maintenance of this equipment. As soon as you enter the industry, you know that no matter what odd-shaped parts, they can be produced with high efficiency. It is nothing more than special equipment (only one process of processing one type of parts) or flexible numerical control equipment (the processing size can be adjusted to adapt to the production of multiple parts). 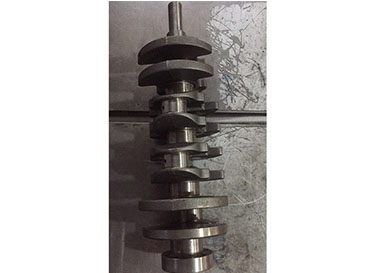 2. Analysis of the cause of crankshaft fracture

Crankshaft fracture is a serious mechanical failure of the engine. The fracture generally occurs at the corners of the crankpin and the connection between the main journal and the crank arm or the stress concentration locations such as the journal oil hole.

The main cause of crankshaft fracture

(1) Due to improper selection of engine oil or careless cleaning and replacement of the "three filters" by individual users, the engine oil has deteriorated after long-term use; serious overloading and overhanging have caused the engine to run overloaded for a long time and cause a bush burning accident. The crankshaft was severely worn due to the engine burning. The engine crankshaft is repaired by replacement, that is, a new crankshaft is purchased and installed, and the damaged crankshaft is sent to the manufacturer for repair. After the crankshaft wear problem appeared in the vehicle, some users, out of cost and time considerations, found some small local factories for repair and processing, and the seriously worn crankshaft was surfacing, processed, and ground after overall heat treatment. Due to repair methods and process problems, the connection fillet between the crankpin and the main journal and the crank arm has changed, causing local stress concentration; because the crankshaft is die forged with precision 45 steel, the metallographic weaving of the crank has also occurred. Variety. The above two are the main causes of crankshaft fracture.

(2) After the engine is repaired, the loading period has not passed the running-in period, that is, overload and overload, and the long-term overload operation of the engine causes the crankshaft load to exceed the allowable limit.

(4) Due to poor road conditions, the vehicle is seriously overloaded and overloaded, the engine often runs within the critical speed of torsional vibration, and the shock absorber fails, which will also cause the torsional vibration fatigue damage and fracture of the Peugeot crankshafts.

Next: Autumn Car Maintenance, Have You Done these Points?