What Is a Crankshaft?

Today's lesson tells you about crankshafts. Crankshafts are not only important parts of the engine but also the key to getting your vehicle moving.

We all know that the piston is going up and down in the cylinder, but the wheel is going round and round. It is clear that the two motions are completely different, so how does an engine achieve this change in the direction of the force? Peugeot crankshafts have played a great role here.

The crankshaft for trucks was so useful that they needed this core component, whether they were straight-four cylinders, v-six cylinders, or even horizontally aligned engines. 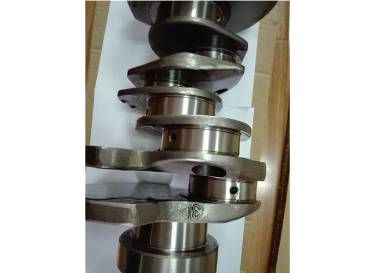 Crankshaft fracture is a serious engine component fault, fracture generally occurs in the crankpin and crankshaft neck and crank arm connection rounded corner or journal oil hole and other places of stress concentration.

(1) due to the improper selection of oil by individual users, or they do not pay attention to the cleaning and replacement of "three filters", the oil is deteriorated in long-term use; Serious overload, overhang, resulting in a long-term overload of the engine operation and burning tile accident. The crankshaft suffered severe wear and tear due to the burning of tiles by the engine. Engine crankshaft to be repaired, that is to buy a new crankshaft installed, will damage the crankshaft will be sent to the manufacturer repair backup. Part of the users in the vehicle crankshaft wears a problem, out of consideration of cost, time, find some local small factory repair and processing, will be seriously worn crankshaft for surfacing welding, processing, after the overall heat treatment grinding processing. Due to the problem of repair method and technology, the connection of crankpin and spindle neck to crank arm has changed, resulting in local stress concentration. Because the crankshaft is forged by precision 45 steel die, the overlaying welding changes the metallographic weave of the crankshaft. The above two factors are the main causes of crankshaft fracture.

(2) after the engine is repaired, the loading does not go through the run-in period, that is, overloading and overloading the engine for a long time, so that the crankshaft load exceeds the allowable limit.

The cause of the problem

The starter and fly gear teeth mesh is bad. The tooth ring and the starter gear will collide when starting the engine, causing tooth damage or unilateral tooth wear. If the teeth are damaged or worn more than three times in a row, it is difficult to engage the teeth of the starting gear and the gear ring.

(2) the cylinder. When the engine temperature is too high, the engine will stop and shut off, and the heat will be difficult to dissipate. The piston ring will stick to the cylinder under high temperature, so it cannot start after cooling.

The crankshaft is locked. Due to the lubrication system failure or the lack of oil caused by the sliding bearing dry friction, which eventually locked the crankshaft and could not start.

Next: Brake Throttle Failure! Neutral Gear Can Save Lives At Critical Moments