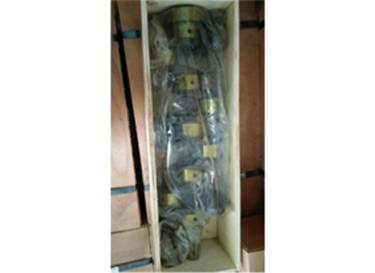 ● what are the causes of common injuries

Crankshaft due to the use of a long time is bound to cause different degrees of wear and tear, we will take stock of the following, a few common crankshaft damages, and analysis of its causes. Provide a reference for friends to find similar situations in practical applications.

1. After the crankshaft journal is worn, the matching gap between the crankshaft and the bearing bush increases. It makes abnormal noise during operation, and the working condition deteriorates.

The reasons for this situation are concentrated, the first may be due to too little oil or oil in the presence of hard abrasive, oil deterioration containing acid. Secondly, the matching gap between the shaft neck and the bearing bush is too large or too small, resulting in the formation of oil film is difficult, the occurrence of dry friction will be early wearing, will also lead to this result.

In addition, when the crankshaft rotates, under the action of centrifugal force, the mechanical impurities in the oil tend to one side of the oil hole and become abrasive, making the journal wear uneven and producing taper. Connecting rod bending, twisting and cylinder sleeve deflection, so that the action on the crankshaft force distribution is not uniform, will also produce taper. All of these reasons will cause the crankshaft journal to wear after the increase of clearance with the bearing bush.

First, whether the oil in the sump has not been replaced on time, which will make the oil containing large metal particles mixed into the cracks between the bearing bush and the shaft neck to carve and pull the friction surface. Second, the maintenance of the air filter is not in place, cylinder liner, piston, and piston ring wear gap increased, with sand, impurities, and other abrasives with air inhalation cylinder combustion after channeling to the oil pan, circulation into the shaft neck and bearing clearance. It also has this kind of possibility, does not pay attention to the cleaning when the factory assembles, causes the diesel engine to bring in the dregs, the metal thing, and so on the abrasive particle.

Burning tile is easy to cause the crankshaft shaft neck burn wear, burns will have blue ablation marks. This situation will cause severe friction between the shaft neck and the bearing bush, and the lubricating oil film will be destroyed. As the temperature rises, the surface of the shaft neck will appear blue. The surface hardness of the journal decreases and the bearing alloy often adheres.

Next: What Is a Crankshaft?