Processing And Manufacturing Principle Of Crankshaft

We all know that the piston in the cylinder is reciprocating up and down, but the wheel is cyclical rotation. Obviously, these two kinds of movements are actually completely unconnected, so how does the engine change the direction of this force? The crankshafts for trucks play a huge role here.

The crankshaft is one of the key components of an automobile engine, and its performance directly affects the life of the automobile. The crankshaft is subject to large loads and changing bending moments and torques. The common failure forms are bending fatigue fracture and journal wear. Therefore, the crankshaft material is required to have high rigidity and fatigue strength and good wear resistance.

The working principle of the crankshaft:

The crankshaft is one of the most typical and important parts in the engine. Its function is to convert the gas pressure transmitted from the piston rod into torque, output power as power, drive other working mechanisms, and drive the auxiliary equipment of the internal combustion engine.

The most common type of fatigue damage to the crankshaft of the engine is metal fatigue failure, that is, bending fatigue failure and torsional fatigue failure. The former has a higher probability than the latter. Bending fatigue cracks first occur at the connecting rod journal (crank pin) or the main journal fillet, and then develop towards the crank arm. Torsional fatigue cracks occur at poorly machined oil holes or fillets, and then develop in a direction that is aligned with the axis. Fatigue failure of metal is the result of a variable stress effect that changes periodically over time. Statistical analysis of crankshaft failure shows that about 80% is caused by bending fatigue.

The main reasons for crankshaft fracture:

(1) Long-term deterioration of engine oil; severe overload and overhang, resulting in long-term overload operation of the engine and tile burning accidents. The crankshaft was severely worn due to the burning of the engine.

(2) After the engine is repaired, the loading of the vehicle has not passed through the running-in period, that is, overload and overhang, and the engine is overloaded for a long time, causing the crankshaft load to exceed the allowable limit.

(4) Due to poor road conditions and severe overload and overhang of the vehicle, the engine often travels within the critical speed of torsional vibration, and the failure of the shock absorber will also cause the crankshaft torsional vibration to fatigue and break.

Maintenance of the crankshaft:

(1) During the repair process of the crankshaft, the crankshaft should be carefully inspected for cracks, bends, distortions and other defects, as well as the wear of the spindle bush and the connecting rod bush. The fit clearance between them is within the allowable range.

(2) Crankshaft cracks mostly occur at the transition fillet between the crank arm and the journal, and at the oil hole in the journal.

(3) When the crankshaft is repaired, the flywheel should be balanced. 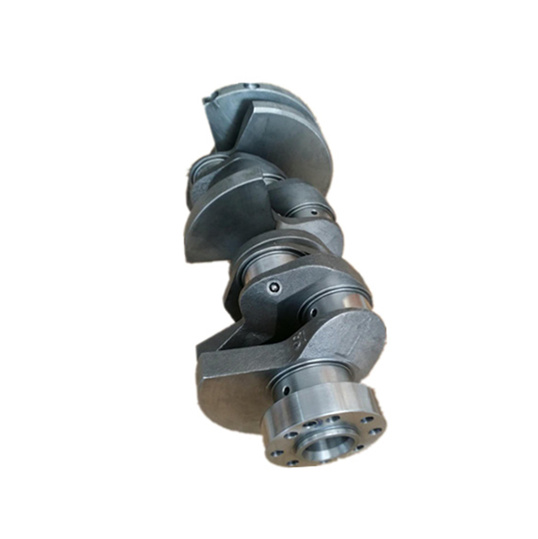 Our company provides a variety of automotive crankshafts, including MERCEDES crankshafts, MITSUBISHI crankshaft sand logo crankshafts. If you have any needs for our products, please feel free to contact us.

Previous: Do You Know How To Disassemble The Turbocharger?

Next: Development of crankshaft