How the Alternator Works?

The rectifier circuit converts the three-phase electromotive force into a DC pulsating voltage; because the battery has the function of a capacitor, the output DC voltage waveform is relatively flat.

When the generator speed is low (the engine does not reach the idling speed), it cannot generate electricity by itself, and the battery is required to supply the generator field winding current so that the field winding generates a magnetic field to generate electricity. This method of generating excitation current supplied by the battery is called separate excitation.

As the speed increases (usually when the engine reaches idling speed), the electromotive force of the generator stator winding gradually rises and can turn on the rectifier diode. When the output voltage of the generator is greater than the battery voltage, the generator can supply external power. At this time, the self-generated electricity can be supplied to the field winding. This self-excitation method of supplying excitation current to generate electricity is called self-excitation power generation.

Working characteristics of the alternator

The working characteristics of the alternator refer to the relationship between the terminal voltage U, the output current I, and the speed n when the generator is working.

The no-load characteristic refers to the relationship between generator terminal voltage U and speed n when the generator is no-load (ie I=0).

When the generator speed is constant, the output voltage U changes with the output current I. 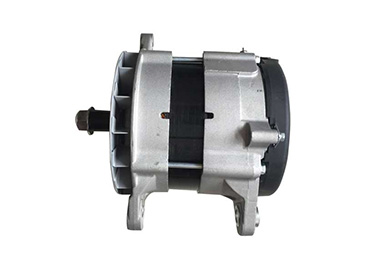 Regulator for Alternator for trucks

Working principle of the voltage regulator

Contact-type voltage regulators were applied earlier. This type of regulator’s contact vibration frequency is slow, there are mechanical inertia and electromagnetic inertia, the voltage adjustment accuracy is low, the contact is prone to sparks, it has large radio interference, poor reliability, and short life. Has been eliminated.

The integrated circuit voltage regulator changes the output voltage of the generator by changing the duty cycle of the magnetic field current.

Previous: Use and Maintenance of Alternator

Next: What Causes a Cracked Cylinder Head?