Truck Maintenance Basic Knowledge Of The Engine (On)

For truck drivers, it is unavoidable to encounter problems with the vehicles they drive all year round, so it is essential to understand some basic maintenance knowledge of the engine. The following is a brief analysis of common faults of alternator for trucks and Maintenance method.

1. Analysis of the causes of body cracks

In use, sometimes the body (especially the cylinder block and cylinder head) cracks. The reasons are as follows:

(2) Improper use. For example, when the engine is under high temperature and lack of water, a large amount of cold water is suddenly added; when starting in the morning in the severe winter season, a large amount of high temperature water is added; start the engine first and add cold water after the temperature rises; without using antifreeze in winter, the parking time is longer The cooling water was not drained, which caused the cooling water to freeze and rupture the cylinder.

(3) Improper maintenance and repair. The main and auxiliary bolts are not tightened as specified;

The self-made water blocking interference is too large; because there is no special maintenance tool, it will crack when the fuselage is turned over. During use and maintenance, pay attention to the above problems to prevent the occurrence of cracks in the cylinder block.

2. Fracture analysis of crankshaft for trucks

Crankshaft fracture is a serious mechanical failure of the engine. The fracture usually occurs at the stress concentration parts such as the crank pin and the connection fillet between the main journal and the crank arm or the journal oil hole. 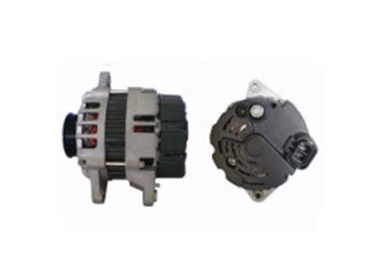 The main cause of crankshaft fracture

(1) Due to improper selection of engine oil or inadvertent cleaning and replacement of the “three filters”, the engine oil has deteriorated for a long period of time; severe overloading and overhanging caused long-term overload operation of the engine and a tile burning accident occurred. The crankshaft was severely worn as the engine burned. The crankshaft of WD615 series engine is repaired and repaired, that is, a new crankshaft is installed and the damaged crankshaft is sent to the manufacturer for repair. After some users experience crankshaft wear problems in vehicles, due to cost and time considerations, they should find some small factories to repair and process them. The severely worn crankshafts are welded, processed, and subjected to grinding after overall heat treatment. Due to repair methods and process problems, the connection fillet of the crank pin and the main journal with the crank arm has changed, resulting in local stress concentration; because the crankshaft is die-forged from a fine 45 steel, surfacing has caused metallographic weaving of the crank Variety. These two factors are the main causes of crankshaft fracture.

(2) After the engine is repaired, the loading period has not passed the running-in period, that is, overload and overhang, and the engine is overloaded for a long time, which causes the crankshaft load to exceed the allowable limit.

(3) In the repair of the crankshaft, surfacing welding is used, which destroys the dynamic balance of the crankshaft without performing balance verification. The imbalance amount exceeds the standard, causing large vibration of the engine and causing the crankshaft to break.

(4) Due to poor road conditions and severe overload and overhang of the vehicle, the engine often travels within the critical speed of torsional vibration, and the failure of the shock absorber will also cause the crankshaft torsional vibration to fatigue and break.

Engine cylinder wear exceeding the allowable standards will severely reduce the power and economy of the car. Therefore, to understand the causes of cylinder liner wear, to hold the cylinder's wear law, to facilitate correct and reasonable use, to reduce cylinder wear and extend the service life of the engine.

Previous: Truck Maintenance Basic Knowledge of the Engine (Below)

Next: Did You Know The Small Mistake In Truck Engine Maintenance?